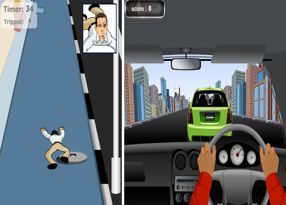 The term "compensation culture" caught on for about two years. The country was warned that we would end up like our American idols, all suing each other - resulting in business closures and bankrupt insurance companies.

Scare stories about school trips being cancelled to avoid injuries (and therefore claims) were common-place. Many urban legends were created: such as the headmaster who made school children wear goggles to play conkers. The story was true, but the headmaster was simply making a statement for a day, not school policy for a lifetime. That point was not part of the reported story. Even if it was - the photo of children in safety goggles playing conkers would have outweighed any such written statement.

To help separate fact from fiction, (or truth from exaggeration), we have created two online flash games highlighting the perceived and actual issues plaguing the so-called compensation "industry".


More information on each section:

Claims Heaven Law Cartoons: A range of topics covered by our burgeoning cynical and satirical minds in a format that is most likely to be viewed than if we wrote an entire 2000-word article on the subject ... as we proved (sadly) last year via the newsfeed - 2007-2012 covered

Train2Claim's Online Compensation Claim Trainer: The compensation claims industry took just over a decade to get from the original burst of craziness (circa 1998 and 'Claims Direct') to the steady market it is today. Despite government claims of successful intervent... - 16.06.12


Street Scammers Reaction Tester: It made headline news when 13 people in Hertfordshire were given jail terms for crash fixing, after creating fraudulent insurance claims worth £250,000. But then only a few months later, Mohammed Pate... - 25.01.12

Search for Solicitors Near You :